Quinoa came up in a few conversations I had last week at the Allergy and FreeFrom Show, and most of what I heard was negative, with people largely expressing grim-mouthed disdain for this South American, naturally gluten-free grain. “Eurgh, it’s really soapy!” said one visitor to our stand.

Soapy? I’ve never noticed this, but I do know that quinoa is covered in bitter-tasting saponins – chemicals which form soapy or sudsy solutions when mixed with water – and I suspect that this could have been the reason for that soapy taste. Solution? Rinse it. I use hot water for a minute or so, but Cookipedia suggest more prolonged rinsing than that.

But that can’t be the only reason for its apparent unpopularity among coeliacs. I wonder whether sometimes people’s unsatisfying first cooking experiences with quinoa put them off trying a second? When you’re new to a food – any food – and you don’t have a great time with it on your first date, it can, I know, put you off for years. I won’t forget my first fling with okra when I was a student in the 80s. How wrong can you go, I reasoned at the time, by first slicing it and rinsing it in preparation to fry it up into a nice curry? Very wrong, as the mucilaginous horror show that resulted in my sieve proved – a culinary nightmare from which it would take 20 years to recover.

Similar thing happened with pomegranates. First time I bought them I had the misfortune to acquire some filled with grim pinky brown seeds which were clearly past their best and tasted like it. Some ten years later, I stumbled upon those glorious, heavy, deep purple, winey Middle Eastern pomegranates – much better than the smaller yellow Spanish ones – and suddenly realised what the fuss was about. They’re now one of my favourite fruits.

So, had I let myself loose on quinoa without a benign guiding hand I perhaps would have stumbled and prepared it badly and put myself off the stuff until, I don’t know, 2028. It was colleague and friend and queen of quinoa Michelle Berriedale-Johnson who first introduced me to it with a dish of quinoa and okra, no less, and I think it may have been this one. It was delicious, I was hooked – and the bonus was discovering okra to be Not Evil.

I’m a wheatie and I’m an Italian. Among the Italians in my world, and those who cross my path, pasta is invariably revered. So what I’m about to say goes against the grain in more ways than one, and is blatant treason: I don’t really rate pasta as a health food. The Italian diet is terrific because of its emphasis on fresh fish and vegetables and home cooking – not for the foods for which we mostly know it, ie pizza and pasta. These aren’t eaten as often as you might think, and often when they are, they are made from scratch, and so likely to be far healthier than ready-made versions seen here. It’s also just too easy for people to go wrong with pizza (too much cheese; not enough veggie toppings) and ditto pasta (simply serving too much of the stuff; adding cheesy rich sauces), that what could and should be averagely healthy-ish fare is served up overly starchy and too fatty.

It is damn tough to go wrong with quinoa on this level. Cheese absolutely doesn’t work with it, and it begs for healthy treatment with vegetables and herbs. Despite my gluten-chomping, and my ethnic background, quinoa has replaced pasta (and rice) as number one staple in my house, and no guest has ever grumbled at being served it.

So, it may be a bit of a predictable choice for Caleigh’s Mint Madness Monday, but there was never any contest because the thought of making minty quinoa appealed immediately. I don’t think I got hold of the best mint: I’m afraid it was one of those sorry little pots you find in Sainsbury’s which invariably makes a violent bid for suicide during the five minute journey from supermarket to home, so try to get hold of some proper fresh and wild stuff, which grows like crazy.

The recipe is simple and non-controversial, and if you’re still thinking you find it bitter, you could, actually, chuck a few pomegranate seeds in it, mix it up, and serve it at room temperature. Even if you don’t try this, or Michelle’s many other terrific quinoa recipes, I would obviously urge you to give quinoa another go and add it to your repertoire, even if you have had an unsatisfactory early experience with it, especially if you’re gluten-free. It’s not that strong tasting, and absorbs flavours well. It could be you just haven’t yet found a quinoa recipe you like yet. Keep looking.

200-250g Quinoa, rinsed in hot water
2 carrots
3 sticks celery
1 large onion
2 cloves garlic
A mugful (or more) of frozen peas
Vegetable stock (made from GF bouillon, two teaspoons) – around 500ml
Lots and lots of mint and lemon or lime juice
Black pepper if you like 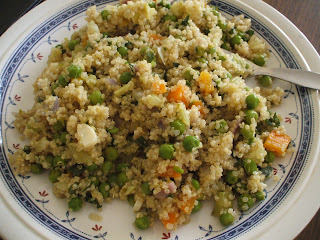 If you want to gently fry the chopped vegetables and garlic in some olive oil first, you can, but I make this virtually fat free and just start to simmer all the vegetables, including peas, in the stock, for a few minutes before adding the quinoa and continuing to cook fairly vigorously for around 15 minutes, until the quinoa’s appearance changes, the tails detach from the grains, and it all fluffs up a bit as it cooks. Add water if you need to as it cooks. Once cooked, remove from heat, let it stand to absorb remaining liquid, then add lots of citrus juice and abandunt chopped mint. Stir. Serve. Eat.

For other recipes in the mint gluten-free recipe challenge, see Caleigh's blog here.